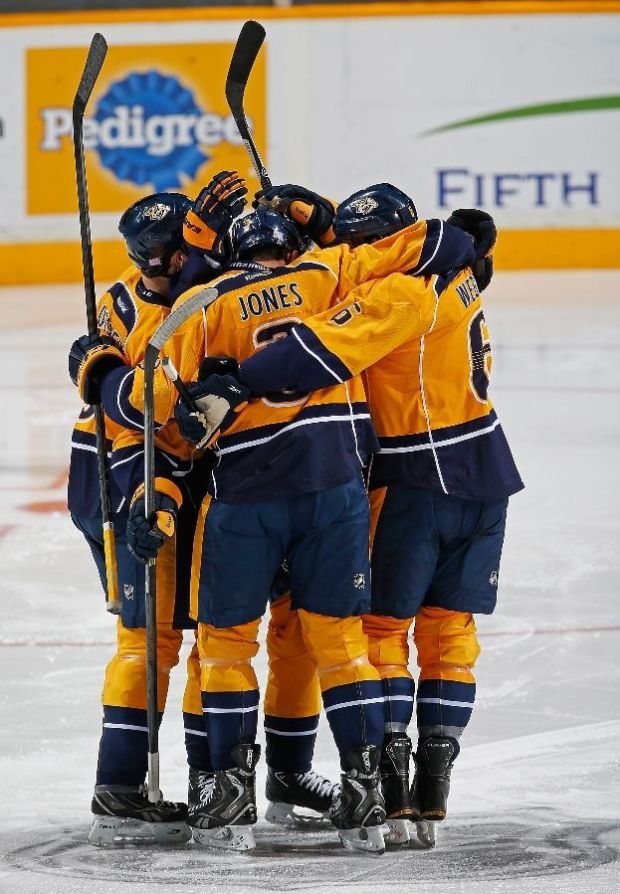 After a six-game road trip, tallying 4-2-0, the Preds returned home last night to face the Edmonton Oilers for the second time this season (first time Nashville won 4-1). Though their record going into last night’s game was numbered at 6-8-1, the Oilers are a much stronger team than they let on. However, Nashville is on a power run and it’ll take more than being strong to knock them off their high horse.

Notable Notes:
– After suffering knee-to-knee contact with Brennan Evans of the Grand Rapids Griffins, it looks like Viktor Stalberg will be out for a 4-6 week period. Due to the injury, Evans has been suspended for four games.
– Good news for Mike Fisher fans as word has it he should be ready to return within two weeks.

First Period:
– Mike Ribeiro wasted no time getting the Predators on the board at 2:51, Nashville’s fastest goal this season. James Neal (4) and Filip Forsberg (10) picked up the assists on Ribeiro’s fourth goal of the season.
– Barely seven minutes later, Matt Cullen collect his second goal of the season with a tip-in past Viktor Fasth at 9:21. Seth Jones (4) and Craig Smith (3) would nab the assists.
– Filip Forsberg would put Nashville up 3-0 at 19:06 for his seventh goal of season and second point of the night. Mike Ribeiro (9) would collect the loan assist on Prince Filip’s goal.

Edmonton bounced back strong in the second and third periods, but Nashville was able to hold them off and seal victory with the return home. As I mentioned, Edmonton’s record doesn’t account for how strong of a team they actually are; they just haven’t hit their stride yet (sounds super familiar). Nashville’s return was a quick one, as they jump back on plane and hop over to St. Louis to try another hand against the Blues, who are itching to push back into first in the Central Division (Nashville has 22 points, St. Louis as 21). Saturday night, Nashville returns with Winnipeg in tow (and it’s Pekka bobblehead night).