Call this just as much a morale victory as it was a shutout because the Predators needed a win like this desperately. Nashville, who has been in a deep, inescapable rut, last won a home game back on February 24th against the Colorado Avalanche. Actually, that was the last game the Predators played well before completely dismantling. Although the Sabres are 20-44-7 (before the game), that did give many fans much encouragement as the Predators continue digging out (or deeper) of their rut.

Again, this could be chalked up as a morale victory more than anything for Nashville. I, for one, am hoping this win will boost the team out of their rut and onward into playoff contention. Ah, but the next opponents isn’t so easy… Montreal is on pass to be one of the first teams to surpass 100 points this season (the other team being Anaheim), a feat we once though Nashville would do. The Canadiens not only lead the Atlantic Division, they also dominate the Eastern Conference at 46-20-7. With Carey Price in net, who has now surpassed Pekka Rinne for wins at 40 (Rinne – 38), this will not be a walk in the park. But I bet you already knew that.

After a not-so stellar performance on the road, the Predators headed back home to welcome in the divisional rival Colorado Avalanche, who might be sitting at the bottom of the Central Division, but certainly not out. Last Friday night, the Avalanche whipped fellow Central Division mate, the Chicago Blackhawks, 4-1 and then went on to defeat the 7th team in the League (the Tampa Bay Lightning) 5-4. Again, Colorado might be down, but they aren’t out. However, Nashville is the Top Dog in the League for a reason and tonight was a night to shush the naysayers.

It is pretty evident why Shea Weber risked a lifetime in the penalty box to protect his fellow linesman. First off, he’s the leader and that’s what a great leader does; second, the memory of Steve Downie’s hit on Roman Josi, just two games into last year’s season. That hit was not investigated like it should have been and Josi was concussed for a few months. Though Downie no longer is a member of the Colorado Avalanche, that wound was reopened by Gabriel Landeskog last night.

Now 41-13-7, the Predators now sit six points ahead of the team second in the league, the Montreal Canadiens. The closest divisional rival, the St. Louis Blues, sit nine points back. Chicago? Twelve points back.

The Predators welcome in the Minnesota Wild for a special 7:30PM start time on Thursday night (airing on NBC Sports).

Well, this isn’t the road trip the Predators expected to have, now is it? After taking a loss Thursday 5-2 from the New York Islanders, then limping away with a point yesterday afternoon against the Flyers, the Predators were hoping to shake off this excruciating road trip with a win against the 17-38-4 (ouch) Buffalo Sabres before returning home on Tuesday.

Inhale slowly through the nose, exhale slowly through the mouth; the Predators walk away with the two points. Okay, but let’s discuss how outrageous Michal Neuvirth was in net tonight. Nashville was doing everything right; you can see that from the amount of shots-on-goal. Unfortunately, Neuvirth was doing everything right, too. The kid blocked 37 of the 38 SOG; that’s Pekka-esque and pretty darn good.

Take a deep breath, my friends. The Predators are back home Tuesday to take on the Colorado Avalanche, who are currently sitting at the bottom of the Central Division. Then it’s a bout with Ryan Suter and the Minnesota Wild on Thursday.

There ain’t no rest for the wicked, as they say and, whether you think the Predators are wicked or not is by personal opinion, Nashville hasn’t had much breathing room. After defeating the New York Rangers 3-2 yesterday afternoon, the Predators were back at it again this afternoon against the Florida Panthers in Sunrise.

It is certainly safe to say that Nashville came into Sunrise, Florida and stole two points from the Panthers. With the collection of two points, Nashville is now 35-12-6 and, thanks to the Lightning defeating the Ducks 5-1, the Predators are now back atop the League with 76 points. Kudos to the Blackhawks as well for taking a chunk out of the St. Louis Blues 4-2 (the Blues are down by four at 72 points). 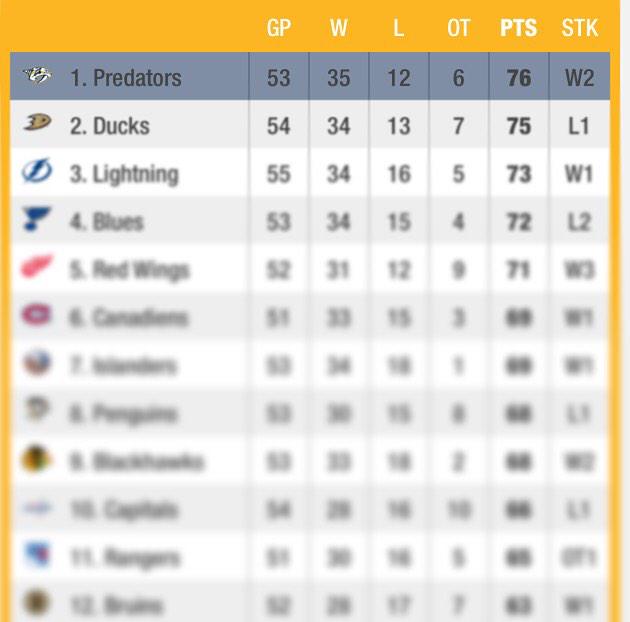 The Predators are back Tuesday night as they welcome the best in the Eastern Conference, the Tampa Bay Lightning.

After losing the Western Conference lead to the Anaheim Ducks Thursday night, the Predators needed the boost from regulation win against the New York Rangers to regain some momentum Saturday afternoon. The Rangers, who were 30-15-4 coming into yesterday’s bout, were riding confidently on a three game winning streak & hoping to extend that to four. Without King Henrik in the net, could the Rangers pull off the win? Or would Pekka Rinne’s return hold off the Blueshirts?

As usual, the Predators have no time to rest. Today, the team is in Sunrise, Florida to take on the 23-17-10 Panthers who are currently sitting pretty in 5th in the Atlantic Division. With Colin Wilson out, there’s a good chance Olli Jokinen will be off the scratched list and, due to being a back-to-back, Carter Hutton will start in net.

The after effects of the All-Star break has been so-so for the Nashville Predators, with the team pulling out an overtime win against the Colorado Avalanche 4-3 at home on Tuesday, then losing last night to the St. Louis Blues in a shootout 5-4. Getting away with points is good and better than straight losing in regulation, but you can only plaster that “don’t freak out yet” smile across your face in so many games and continue to believe yourself. The thoughts of knowing you cannot get away with this within the playoffs keep pounding in the back of your mind, but you just… keep… smiling. Onward to the recap:

With St. Louis closing the gap for the lead of the Central Division, Nashville really could’ve used two points – especially in regulation. However, to be positive, they still left with a point and still lead the division by four points. Here are some other important notes to take away from this game:

Now… to discuss what everyone is wondering… What the heck did we hear during the broadcast last night?!
Here’s a little background, in case you missed it: During the first period, sometime around Mike Fisher’s first goal of the night, the sound of a woman… uh… in action (?) could be heard whilst Pete Weber and Stu Grimson were commentating. Take a listen (warning: could be considered offensive or you may be unable to control your laughter):

Yes, you heard exactly what you thought you heard, my friends.

@Lady_Preds ok so glad someone else heard that. I thought I was going crazy!

Yes, I deemed it as “barking” at first because I did not want to automatically assume some lady was uh… yea.

Fox Sports Tennessee was quick to apologize, but not before we also got to hear Stu Grimson belching on air:

We apologize for the technical difficulties during the Predators game. We're currently investigating the situation.

“@justinbbradford: And then we just heard Stu belch loudly. WTH is going on with this broadcast…” pic.twitter.com/rzSdBN80if

The Predators are back at it tonight in Denver to take on the Avalanche, a team the barely defeated on Tuesday. Tonight’s game is Nashville’s last Central Division away game until April 7th and their last Western Conference away game until March 9th.

After a disappointing loss to Detroit 5-2 Saturday, the Predators hit the road to Montreal for one more game before the All-Star break this weekend. Though Nashville handled themselves well last Friday against the Washington Capitals with Carter Hutton in net, bringing him in back-to-back the next night proved fatal; though Detroit was on point that night no matter who was guarding Nashville’s net. So, what’s been going on since the defeat?

#Preds are in Montreal tonight for a 6:30pm/CT puck drop against the Canadiens. Preview – http://t.co/Nv74YylIgN. pic.twitter.com/kuEt2fSvEI

Reminder: Nashville has not lost back-to-back games this campaign, recording a win after each of their regulation or OT losses. #Preds

Carey Price looks good at practice. If everything goes well he'll be in net tonight vs #predators #canadiens

Unless you live under a rock and are just now crawling up from underneath it, you know that a certain someone who helped establish Nashville as a legitimate hockey town will be making an appearance tonight on the opposing team’s bench. Yes, Mitch Korn will be here also but I’m talking about former Predators head coach (and now head coach of the Washington Capitals), Barry Trotz.

If you were lucky enough to score tickets to tonight’s match up (the game sold out a few days ago), you’ll be certain to get a little teary-eyed with a touching tribute video to the former coach who helped Nashville in so many ways both on and off the ice. But don’t you dare forget this man is here to collect two points and hit the road and what better way to continue their three-game winning streak than to knock out the league leader?

#Preds & #Caps catching up before the morning skate. Volchenkov and Ovechkin in the middle. pic.twitter.com/KFDGrIRi8b

Forsberg leading the stretches at morning skate for the #Preds against the #Caps. Because of course.

Mitch Korn comes walking out of the #Preds equipment room saying, "I'm allowed to do this!" #Caps

Saw Rinne in the equipment room, was walking around wearing a brace on his right knee.

Forsberg: "It's either that one team doesn't want you or the other really wants you. I decided to look at it like NSH really wanted me."

There’s no hangover for Nashville after claiming both victory over the Dallas Stars in OT and the No. 1 spot in the League, but there is noteworthy news to be discussed.

Welp, that’s the news for now. Of course, if anything else pops up – like if the NHL wants to ignore the Predators some more – it’ll be added to the list!

After being recalled by Nashville this past week & sitting patiently on the Scratched list, Miikka Salomaki may finally be making his NHL debut tonight against the Dallas Stars.

There’s a good chance he’ll make his debut tonight due in part to both Eric Nystrom and James Neal being officially placed on the Injured Reserve. Though Neal’s placement was eminent, Nystrom comes as a bit of a surprise. I am not sure where he sustained an injury, as he seemed fine against the Hurricanes Tuesday and no news off an injury came about afterwards (until now).

It is interesting to note, however, that both Taylor Beck and Matt Cullen participated in today’s practice (they are both currently on IR). During this morning’s skate, Salomaki formed a third line alongside Olli Jokinen and Calle Jarnkrok, but we shall see if he truly makes his debut sometime before game start.