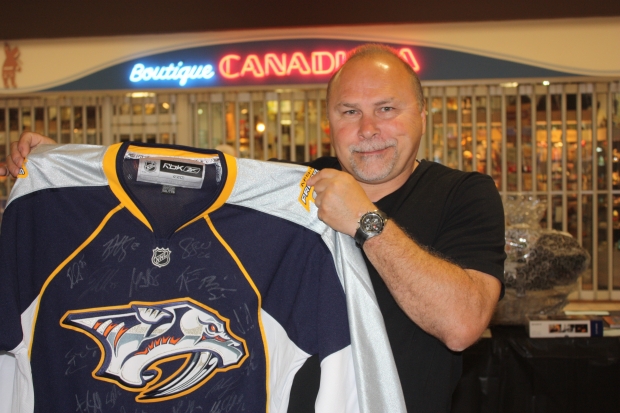 Unless you live under a rock and are just now crawling up from underneath it, you know that a certain someone who helped establish Nashville as a legitimate hockey town will be making an appearance tonight on the opposing team’s bench. Yes, Mitch Korn will be here also but I’m talking about former Predators head coach (and now head coach of the Washington Capitals), Barry Trotz.

If you were lucky enough to score tickets to tonight’s match up (the game sold out a few days ago), you’ll be certain to get a little teary-eyed with a touching tribute video to the former coach who helped Nashville in so many ways both on and off the ice. But don’t you dare forget this man is here to collect two points and hit the road and what better way to continue their three-game winning streak than to knock out the league leader?

#Preds & #Caps catching up before the morning skate. Volchenkov and Ovechkin in the middle. pic.twitter.com/KFDGrIRi8b

Forsberg leading the stretches at morning skate for the #Preds against the #Caps. Because of course.

Mitch Korn comes walking out of the #Preds equipment room saying, "I'm allowed to do this!" #Caps

Saw Rinne in the equipment room, was walking around wearing a brace on his right knee.

Forsberg: "It's either that one team doesn't want you or the other really wants you. I decided to look at it like NSH really wanted me."