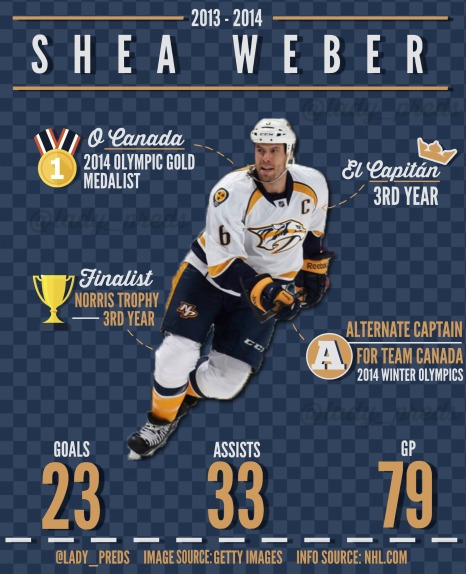 Yea, I’m the quiet blogger during the summer months when it comes to hockey (if you are just now figuring that out). That doesn’t mean I am not thinking about hockey; oh no. This brain of mine is hockey-filled, I just leave the other bloggers to the nitty-gritty during the off-season. …Unless something major happens.

Any who, you’ve probably already checked out the “mini” infograph (as I so lovingly call it) on Shea Weber. You likey? Whether you do or not, I will be putting more of these out before the season starts just to reflect on some numbers and/or facts from last season. Why don’t you just type it all out, you ask? Because I am obsessed with infographs and this gives me a chance to enhance my graphic skills and cover hockey, too.

Feel free to “pin” this to your Pinterest board, ladies (and gentlemen), but please do not crop out the bottom. Credit is given where credit is do. Plus, I’ve stuck hidden @Lady_Preds script throughout the image, so there’s no use.

But please enjoy this as much as I enjoyed creating it.

Team Canada announced the captains for their designated teams for the Winter Olympics this morning, with Shea Weber serving as an Alternate Captain for the Ice Hockey Team. Sidney Crosby of the Pittsburgh Penguins will hold the title of Captain & Jonathan Toews of the Chicago Blackhawks will hold the second Alternate title.

If you follow any of our social media outlets, we mentioned Shea Weber being named to Team Canada but we neglected to add it here! My bad.

Any who, from the headline, you now know that Shea Weber will be representing both Canada and Nashville in the 2014 Winter Olympics. He, along with Roman Josi and Simon Moser will be the only Predators heading off to Sochi in February.

Don’t be put down by the number difference here, though. Out of the list above, the only other player besides Weber going to the Olympics this year is Ryan Suter. Heck, Germany isn’t even participating in this year’s Olympics; well, at least that we’ve found.

In regards to Patric Hornqvist’s snub by Sweden, he has been quoted as saying he is disappointed by the decision & Trotz has said he has “no idea what the Swedish team was thinking”. Honestly, we don’t either, except for the fact that Sweden is a powerhouse when it comes to producing talented hockey players. Hornqvist wasn’t the only talented Swede left off that Tre Kronor roster.

So, in a nutshell Preds fans, we’ve only been given three (one that may hardly know a.k.a. Moser), but be proud of those three! Congratulations to Josi, Weber, and Moser!

Surely SK74 and Patric Hornqvist aren’t going at it? Picture from the 2010 Olympics.

With Slovakia ending the Czech Republic’s run at the championship 3-1 in the semifinals, all of Nashville’s players have been eliminated from the IIHF World Championship. The Predators had a good amount of players who jumped on board after the post season, despite going into Round 2 of the Stanley Cup playoffs. Here’s a final rundown of who played for who:

Team Belarus and the Kostitsyn brothers were first to be knocked out of the tournament, falling to Team Canada 5-1 on Tuesday, May 15th. Sergei Kostitsyn did manage to collect a goal during his short run in the tournament. Also on Tuesday, Craig Smith and Team USA eliminated Roman Josi and Team Switzerland 5-2. On Thursday, Team Finland overthrew Team USA to advance 3-2, knocking out rookie Craig Smith.  Martin Erat, who notched a goal against Team Sweden, eliminated Patric Hornqvist and Tre Kronor 4-3.

As of yesterday’s game between Team Slovakia and Team Czech, Marty “Party” Erat was the only Predator left in the running for the gold. Unfortunately, Erat was sidelined early in the semifinal game, leaving the ice during the 1st Period after a shoulder check by Slovakia’s Libor Hudáček. Here’s the video from the game:

It was announced by Czech GM Slava Lener that Martin Erat does have a concussion, which could potentially affect the Predators in the upcoming season. Although the 2012-13 season is a little over five months away, concussions are a bit of mystery when it comes to treating them properly. That, and Martin Erat’s history of concussions is virtually unknown, so the way his body handles the healing process of a concussion will be on a day-to-day basis.

Martin Erat, though his a bit more serious, was not the only player injured during the World Championship. Sergei Kostitsyn dislocated his shoulder during the match between Team Canada after being hit by Kris Russell, a currently St. Louis Blues defenseman. As stated, although not as serious as Erat’s concussion, Kostitsyn will have to sit back a while to let it properly heal.

UPDATE ON ERAT CONDITION:
Martin Erat’s agent, Mike Deutsch has just announced that, despite what Czech GM Slava Lener stated earlier, Erat did not suffer a concussion and is simply suffering from a ‘stiff neck’. Good news for both Martin Erat and the Nashville Predators, but we will keep you updated in case the story changes once again.

Hockey has officially ended for Smashville, but hockey altogether is still chugging along, wether our favorite players are on the ice or not. Now that all is done, it’s now time for the part of the off-season everyone dreads: Who stays and who goes…

Martin Erat being helped off the ice.

Sergei taking a break during practice.

Sergei Kostitsyn, or SK74 as he is affectionately called, is what is known as a “young gun, rebel” type… or, at least, he was. Sergei has worn the Predators jersey for two seasons now and, although they’ve heard the many of rumors, Nashville has never seen the rebel, immature side of the 25-year-old Forward from Belarus.

A 7th Round Pick in the 2005 Draft at the tender age of 18, Sergei was a bit of a diamond in the rough. The potential was clearly there (he wouldn’t have even been considered for the NHL if it hadn’t), just a little masked by insecurity and a lack of confidence in himself. SK74 was drafted by the  Montréal Canadiens, the same team that found potential in older brother, Andrei Kostitsyn.

As most former Habs players have admitted, finding the perfect fit in Montréal is a bit challenging, and with his lack of confidence and insecurity, Sergei found himself fighting to stay above water. In frustration, Kostitsyn did whatever he thought would get himself more attention, and potentially more ice time. However, acting out and bad behavioral issues wasn’t the direction the young Forward wanted to walk down, especially alone.

Missing the bus to a preseason game in 2009, being suspended for not reporting to Montréal’s AHL farm team, the Hamilton Bulldogs; Sergei and fellow teammate, goaltender Carey Price even got into an argument about Sergei’s lack of effort and commitment to the team. Montréal and Sergei Kostitsyn were clashing, and both the NHL and the KHL were watching.

Though his behavioral issues out-shined his potential as a great player at times, one team saw past the frustration and immaturity that comes with being a young, ice-deprived hockey player. The Nashville Predators traded Dustin Boyd and Dan Ellis in the off-season of 2010, giving the Belorussian a chance at a fresh start.

Both Coach Barry Trotz and General Manager David Poile worked with Sergei, highlighting both his strong and weak spots, instead of letting him fall the the wayside like he had with the Habs. Two seasons later, Sergei Kostitsyn found himself on the top line along with Mike Fisher and Martin Erat, and notched his first career Hat Trick on January 1st.

However, Sergei still had his off moments in both the 2011-12 season and post season. Lack of confidence still plagues the young Belorussian, causing him to miss key passes, shots, and goals. Although he performed well during the Detroit series in the playoffs, SK74 struggled in the Phoenix series, being replaced on the top line by Colin Wilson.

After two season, Sergei Kostitsyn has expressed his desires to be signed to a long-term contract by Nashville, the one team who he was nestled with soundly. No word if SK74’s agent has met with the club yet, but the deadline to tender qualifying offers to restricted free agents is June 29th, giving both sides a little over a month to come to a decision.

Recently, both Sergei and older brother Andrei jumped on board with Team Belarus for the IIHF World Championship. Although Belarus was recently knocked out by Team Canada, Sergei was able to score a goal in his short time with his country’s team. However, Sergei collided with Team Canada’s Kris Russell yesterday, separating his shoulder. Team Belarus Head Coach, Kari Heikkilä stated that Sergei will be all right, but will need to rest for one to two weeks.

Looking back at his issues with Montréal, it’s clear why Sergei wishes to stay with the Nashville Predators. Not only has Nashville worked one-on-one with SK74, tweaking and fine-tuning his value, the club has become both a home and family to Sergei. Nashville has just begun polishing this diamond in the rough, and Sergei Kostitsyn wants to shine brighter.

Roman Josi will hit the ice with Team Switzerland.

The playoffs and hopes of a Stanley Cup in Nashville are over for the Predators, but for some of the players, a chance at a championship isn’t quite over. As teams have slowly but surely been eliminated from the Stanley Cup playoffs, NHL players have been packing up and heading to Europe to compete with their country’s national team for the International Ice Hockey Federation (IIHF) World Championship.

With sixteen countries represented, almost all have some support from an NHL player, minus France, Latvia, Italy, and Kazakhstan. If you’d like to check out who’s representing who, check out the IIHF website. However, since being eliminated on Monday night by the Phoenix Coyotes, members of the Nashville Predators have been stepping up for their respected national teams and continuing their time on the ice.

The rookies have proven they aren’t ready for off-season, with defenseman Roman Josi jumping on board with Team Switzerland and forward Craig Smith joining Team USA. Martin Erat is in the works with joining Team Czech Republic, along with Andrei and Sergei negotiating with Team Belarus. More Predators players are suspected to join their respected countries as the week goes on.

The IIHF World Championship tournament is going on now until May 20th, in both Helsinki, Finland and Stockholm, Sweden.

Update: Just as we expected, another Predator has joined the IIHF for the World Championship. Patric Hornqvist has hopped on board with Team Sweden. We will keep you updated as new players join their country’s team.