Yes, yes, we are only two days late on this post, but hey, it’s almost Christmas and we are running on little sleep and rushing to find last minute Christmas presents. We deserve a little slack! Any who, besides our excuses, the Predators almost had to come up with some excuses for themselves Saturday night. Although they got away with the two points, it was clear (even though this makes me cringe to the BONE to admit) that the St. Louis Blues came out the stronger team Saturday night. Lucky for the Predators, Pekka Rinne came out to play and blocked 39 of 40 shots taken at him. In the first period alone, the Blues out shot the Predators 14 to 2. Okay honestly, what Predators fan was surprised by this? As of late, the Predators had been upping their shots on goal, but Saturday was reminiscent of old times. However, any way you look at it, the Predators got away with the win, ugly or not. Here are the highlights from Saturday night’s shutout win for the Predators:

Again, sort of a slow, ugly penalty-taking game for the Predators at first, but what matters is the big W belonged to the home team. Like the Detroit game Thursday night, Saturday’s game against the Blues was played before a sold out crowd. That’s always music to Nashville’s ears, even if most of the tickets went to Blues fans.

The Predators are off to Washington D.C. to visit Tomas Vokoun and Joel Ward (oh, and that Ovechkin guy) tomorrow night at 6PM. The Predators will be back home Thursday night to welcome back Columbus. GO PREDS.

Oh, and just for a little laugh, here is a 2012 Predators calendar we came across on Amazon.com today: 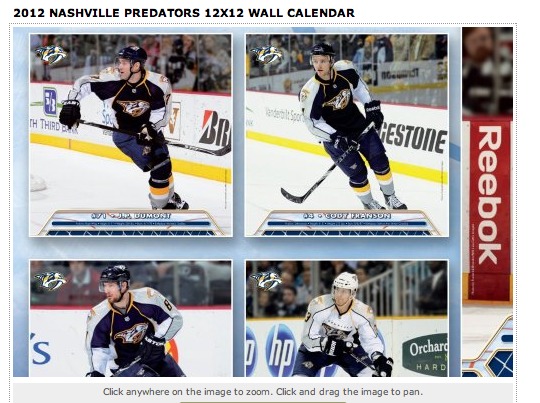 If only they accidently put Shane O'Brien in there...

As stated above, this is a 2012 Player Calendar. On the bottom, you can see Kevin Klein and Colin Wilson, who are still on the team. However, above are J.P. Dumont and Cody Franson… both not on the team. Franson was traded to Toronto with Matthew Lombardi and Dumont now plays for S.C. Bern. We have to give the calendar maker some slack, since they probably made this available by midsummer, but still – Major boo-boo here. These two weren’t gone this summer, before the 2011-2012 team was finally together (even then, it’s ever changing). We don’t dislike Franson or Dumont in any way, just pointing out an obvious fail on the calendar-maker’s part. It’s on sale for $12.47 on Amazon.