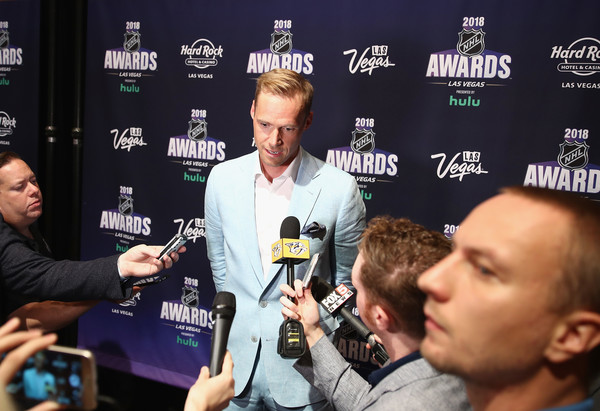 It’s about darn time, y’all. After being nominated three times previously (2011, 2012, 2015), fourth time was the charm for our beloved Finnish goaltender.

Mike Fisher brings home the only award back to Nashville.

Yet another disappointing NHL Awards for Nashville Predators fans.
Okay, so we can’t call it a complete loss; Mike Fisher did win the NHL Foundation Award thanks to his charitable work within the Nashville community. The NHL even donated $25,000 to Room in the Inn, a local non-profit that serves the homeless of Nashville. As residents of the city of Nashville, we are proud to have someone like Mike Fisher in our community and to us, this is the greatest award the Predators could have received…

HOWEVER, as proud as we are and excited for Mike Fisher, we still are a tad bit bitter.

Pekka Rinne fell short to Claude Giroux for the NHL13 cover, which completely baffles anyone involved with hockey (we’re pretty sure even EA Sports was confused by the announcement). However, according to EA Sports, it was decided “by less than a one percent margin, in what was the closest matchup of the entire campaign.” Hmm… as much as we were stunned by the announcement (I mean, jaws hit the floor), we can always cover the NHL13 box with this awesome photo:

Fan-made NHL13 Cover. Just print this out and tape over Giroux.

Yes, we’re a bit bitter with the losses, but hey, Mike Fisher snuck by and nabbed an award, and an award to be proud of at that. Congratulations, Mike Fisher!

Friday begins the 2012 NHL Draft, in which Nashville gets two 2nd Round picks and the Predators Prospect Camp starts next Tuesday at Centennial Sportsplex. We’ll keep you updated on the trades and signings as they come in. And yes, Chris Mueller was signed to a one-year, $550,000 contract this morning.


Thanks to Gene Vestal for the video. Sums up all Preds fans thoughts exactly.