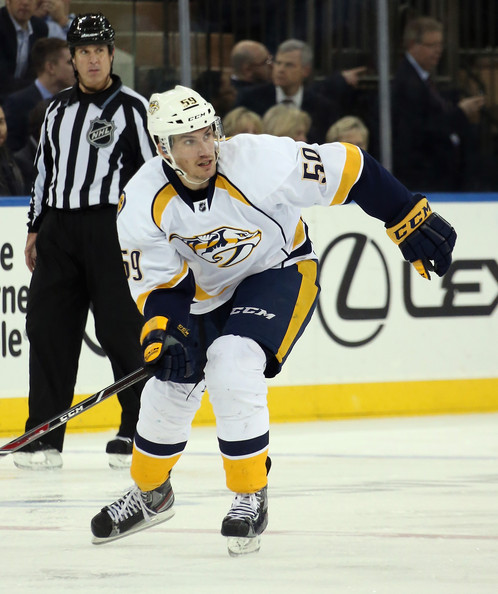 Ahh, another visit with the St. Louis Blues. Normally, a game this early wouldn’t be this pressurized (so to say), but because both St. Louis and Nashville are bouncing between first and second place within the Central Division, it’s going to have some tension. So, did Nashville cling to the coveted top spot or did St. Louis push its kid brother aside for first place?

First Period:
– Leave it to T.J. Oshie to put the Blues on the board first at 3:25 with his first goal of the season and a PPG on top of that. Oshie has been waiting for that goal since being placed on the IR after suffering a concussion back on October 28th against the Stars.
– The Blues would launch themselves up 2-0 at 12:45 with a goal from Carl Gunnarsson; his first goal of the season.
– Saving Grace Filip Forsberg would put Nashville on the board less than a minute later at 13:21 for his eight goal of the season. James Neal (5) and Roman Josi (5) would collect on the assists.

Second Period: – Captain Shea Weber would tie the game at 2 with his fifth goal of the season at 3:41. Filip Forsberg (11) and Roman Josi (6) would pick up the assists.

– At 15:18, Vladimir Tarasenko would work his magic for his tenth goal of the season, putting St. Louis up 3-2 late in the second.
– With under a second left in the second period, Roman Josi sunk a PPG to tie the game for his second goal of the season. Shea Weber (3) and Filip Forsberg (12) assisted in the tying goal.

Third Period:
– The lone goal of the third period would come from Paul Stastny, sealing the game and the top spot of the Central Division in favor of St. Louis.

So Nashville falls to St. Louis 4-3 in regulation, giving the Blues the reigning spot of the Central Division. However, Nashville is still right behind St. Louis, so one false move and they’ll be back in second place.

Well, what can I say about last night’s game? Glad I was celebrating my college’s Homecoming, perhaps? Nah, I would’ve gone down with this ship if I had been there, but ouch; what a terrible way to start a long, seven-game road trip. The St. Louis Blues have always picked on little brother Nashville, but last night’s performance made even the strongest stomachs do a few flips, even all the way in Cookeville.

So, were there any highlights from last night’s game? Eh, one or two, but if I was a Blues blogger, I’d be up all night with this one. But there are still somethings we can discuss:

Welp, not too much to say after that game except Pekka’s injury has a lot of people freaking out. However, you cannot blame Carter Hutton for the awful game, though he isn’t out of the hot water just yet.

Also, the fact that Viktor Stalberg continues to be healthy scratched is not a good sign between he and Barry Trotz. He has expressed his distain and, you sort of side with the guy. Fourth line with Hendricks and Gaustad? Yea, not exactly an area to produce much from. It’s easy to understand his frustration but… that is the way of the Trotz. Someone has to take up residency in his dog house, and it looks like Mr. Stalberg has found his way.

Nashville has a few days off before heading out to Arizona to take on Phoenix on Halloween at 8PM.

Shea tries some defensive moves to avoid another Blues goal.

If you watched any of tonight’s game, you noticed the Predators did not retain any of their confidence from Tuesday night’s win over the Minnesota Wild. Or maybe, they are just that unnerved by the St. Louis Blues. Nonetheless, wether it be sheer nerves or a lack of confidence, it was clear the Predators were not ready to gain their second win. What was also clear? The lack of a complete offensive initiative. Any Predators stronghold will tell you, offense is not Nashville’s strong suite, but tonight’s performance made it overly apparent.

Plentiful penalties also played a huge factor in tonight’s loss for the Predators, with both sides taking their share, but the Preds took six to the Blues’s five. By the looks of the way they performed tonight, Tuesday’s game was a mere fluke by the Wild. The Predators have an uncountable amount of work to do if they wish to see the post-season. Here is the rundown of tonight’s game:

Like we mentioned above, penalties plagued both sides tonight, but the Predators took the brunt of the penalties. The Predators were given five chances by the Blues to gain their footing, but St. Louis wanted nothing of it, denying any chance of a goal for Nashville. Here are your penalty box lovers:

No fight, no battle from the Predators tonight against the Blues. Expressing the fact that the Blues had the upper-hand the entire game cannot be spoken enough. The Predators were not physically, mentally, or emotionally ready to face the No. 1 Blues tonight, no excuses needed.

Though the Predators will find their groove again, this will not be the end of the psychological impact the Blues have over the Preds this season. The Predators face the Blues in St. Louis once again on February 5th.

The Predators are off to the Golden State to face the Anaheim Ducks this Saturday at 9:30PM. Hopefully, the Ducks do not hold the same voodoo over the Predators has the Blues do.

Until then,
GO PREDS

Predators notched a few more goals, but was it enough?

We’d like to start out with an explainable excuse as to why the Predators fell short tonight against the Blues, but unfortunately, rust and adjustments just can’t quite get them by tonight. The first period started out slow and steady for the Predators, then rocket-powered during the second. The momentum seemed to fizzle during the third, and completely dissipate during overtime. With the team heading straight to Minnesota tonight, are the Predators ready to take on this hectic, fast-paced season? Here’s the rundown of tonight’s head-shaker:

The Blues spent more time in the penalty box than the Predators did (Predators only landed in the box during the first period), but the Preds only had one more powerplay goal than St. Louis. Here’s the penalty box rundown:

The Predators have no time to recuperate or collect themselves before the next game, as they should be on a plane headed to Minnesota to face the oh-so-wonderful Zach Parise and Ryan Suter. Though not completely run over by the Blues like the Red Wings were on Saturday, the Predators still have more work to do if they want to compete in this short, fast-paced season. Offense is definitely a must, but that goes with a grain of salt. If the Predators do not collect themselves fast, they’ll be sitting on the shelf before they can even catch their breath.

The Predators will be in Minnesota tomorrow to face you-know-who and the Wild at 7PM. You won’t see the Preds back in Nashville until February 7th, so prepare yourselves for TV screaming time, thanks to the circus coming to town (yay!).

So what attitude will the Predators take on this seven-game road trip? We are hoping offensive, physical and mental toughness, along with plenty of shots-on-goal. We’d appreciate plenty of road Frosties.

Pekka Rinne goes to stop the puck before St. Louis could score again.

St. Louis already has their playoff spot clinched, but the Predators only need one more point to capture a spot of their own. The only team standing in their way, of course, is the leader of the Central Division, the St. Louis Blues. Nashville has actually made a good standing against the Blues this season, only losing once 3-2 in a shootout back on February 23rd. In the previous three games, the Predators were able get the best of St. Louis.

Only one game stood between the Predators and a playoff spot (and Barry Trotz’s 500th win). Were the Predators able to knock off the reining champs of the division? Here are the highlights from tonight’s game:

Not the game the Predators needed to lose, but the team has no time to sulk in misery. Luckily, the Blackhawks lost in a shootout against the New Jersey Devils, falling back a few steps, too. Although the Predators are not likely to face the St. Louis Blues to start off with in the playoffs, depending on how far they advance, they will eventually… and that’s nerve-wracking from a fan’s perspective. If only the Predators can channel the momentum they had against Chicago on Sunday and continue to play that way.

The Predators aren’t headed home just yet. Before taking on the Chicago Blackhawks on Saturday in Nashville, the Predators have to drop by Detroit one last time this season to face the Red Wings on Friday. Again, channeling Sunday’s game would be ideal. Barry needs his 500th.

Rookie Roman Josi finds the back of the net for his third goal of the season.

The Predators welcomed division rival St. Louis Blues to Nashville Thursday night, seeking to extend their winning streak to three. However, the Blues were just as hungry (if not more) than the Predators, seeking to finally take the almighty Predators down for this first time this season. Here are the highlights from Thursday night’s game in Smashville:

The Blues left Nashville with the two points, but Nashville was able to get away with one point, which is much better than losing in regulation. It was clear that the Predators did not have their heads in the game – either they assumed a win against the Blues or they were just completely out of it – and the St. Louis Blues took complete advantage of the situation at hand.

The Predators continue the home stretch against the San Jose Sharks on Saturday, who are 32-21-6 on the season and are 2nd in the Pacific Conference.

LadyPreds.com is not affiliated with the NHL or the Nashville Predators. Just a fan and her thoughts. All photos and/or content are either that of Lady Preds or of their respective owners. Credit is given to content not that of Lady Preds.
Loading Comments...
Comment
×