It was the Nashville Rinnes tonight as the Predators finished up their road trip in St. Paul against the Minnesota Wild. What do I mean by the “Nashville Rinnes”? Well, by the outcome of the game, if it hadn’t been for Pekka, we’re pretty sure the Wild would’ve ended the game 29-o.
Now, we aren’t ones to put down the team, but it was clear the Predators were exhausted. They did not come out with the enthusiasm that they had against the Habs or the Jets. Pekka was on top of his game, as usual, so thankful we are for an amazing goaltender. Here are the minuscule highlights (for Nashville, anyways) from tonight:

First Period:
No goals, but plenty of tiffs. Five penalties overall, with Nashville taking three of those. Rich Clune, in his first game back in a while, dropped the gloves with Zenon Konopka at 2:07.

Second Period:
Late in the second, Minnesota would finally slip one around Pekka Rinne with a wrister from Justin Fontaine at 18:53.
Minnesota would end the second period leading Nashville, not only in goals, but in shots on goal with eleven to six.

Third Period:
Pekka would continue to battle against an aggressive Wild team, only to be pulled for the extra man late in the game. Unfortunately for Nashville, Jason Pominville would collect an empty-netter for the game-winning goal at 19:35.

Exhausted and with no heads in the game, Nashville stood no chance against a win-hungry Minnesota Wild. However, Nashville returns home Thursday to take on a recent opponent, the Winnipeg Jets. After the outstanding win Saturday, will the Predators know which buttons to push on the Jets?

The Predators started their mini road trip with the first stop in Montreal against the 5-2-0 Canadiens. Nashville didn’t fair so well against fellow Original Six Canadian team, the Toronto Maple Leafs, so how would they fair against the Habs?

Well, you’re about to find out:

What a wrister from the rookie. Wowza.

The game would remain tied at 1 at the end of the second period.

The Predators would keep Montreal at bay until the final buzzer, collecting their first away game win of the season.
The Predators have no time to celebrate, though; it’s off to Winnipeg to take on Matt Halischuk and the Jets, the first meeting of the two new conference rivals this season. 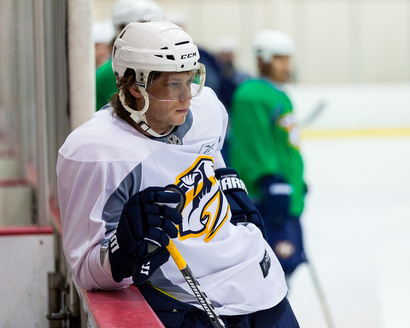 Sergei taking a break during practice.

Sergei Kostitsyn, or SK74 as he is affectionately called, is what is known as a “young gun, rebel” type… or, at least, he was. Sergei has worn the Predators jersey for two seasons now and, although they’ve heard the many of rumors, Nashville has never seen the rebel, immature side of the 25-year-old Forward from Belarus.

A 7th Round Pick in the 2005 Draft at the tender age of 18, Sergei was a bit of a diamond in the rough. The potential was clearly there (he wouldn’t have even been considered for the NHL if it hadn’t), just a little masked by insecurity and a lack of confidence in himself. SK74 was drafted by the  Montréal Canadiens, the same team that found potential in older brother, Andrei Kostitsyn.

As most former Habs players have admitted, finding the perfect fit in Montréal is a bit challenging, and with his lack of confidence and insecurity, Sergei found himself fighting to stay above water. In frustration, Kostitsyn did whatever he thought would get himself more attention, and potentially more ice time. However, acting out and bad behavioral issues wasn’t the direction the young Forward wanted to walk down, especially alone.

Missing the bus to a preseason game in 2009, being suspended for not reporting to Montréal’s AHL farm team, the Hamilton Bulldogs; Sergei and fellow teammate, goaltender Carey Price even got into an argument about Sergei’s lack of effort and commitment to the team. Montréal and Sergei Kostitsyn were clashing, and both the NHL and the KHL were watching.

Though his behavioral issues out-shined his potential as a great player at times, one team saw past the frustration and immaturity that comes with being a young, ice-deprived hockey player. The Nashville Predators traded Dustin Boyd and Dan Ellis in the off-season of 2010, giving the Belorussian a chance at a fresh start.

Both Coach Barry Trotz and General Manager David Poile worked with Sergei, highlighting both his strong and weak spots, instead of letting him fall the the wayside like he had with the Habs. Two seasons later, Sergei Kostitsyn found himself on the top line along with Mike Fisher and Martin Erat, and notched his first career Hat Trick on January 1st.

However, Sergei still had his off moments in both the 2011-12 season and post season. Lack of confidence still plagues the young Belorussian, causing him to miss key passes, shots, and goals. Although he performed well during the Detroit series in the playoffs, SK74 struggled in the Phoenix series, being replaced on the top line by Colin Wilson.

After two season, Sergei Kostitsyn has expressed his desires to be signed to a long-term contract by Nashville, the one team who he was nestled with soundly. No word if SK74’s agent has met with the club yet, but the deadline to tender qualifying offers to restricted free agents is June 29th, giving both sides a little over a month to come to a decision.

Recently, both Sergei and older brother Andrei jumped on board with Team Belarus for the IIHF World Championship. Although Belarus was recently knocked out by Team Canada, Sergei was able to score a goal in his short time with his country’s team. However, Sergei collided with Team Canada’s Kris Russell yesterday, separating his shoulder. Team Belarus Head Coach, Kari Heikkilä stated that Sergei will be all right, but will need to rest for one to two weeks.

Looking back at his issues with Montréal, it’s clear why Sergei wishes to stay with the Nashville Predators. Not only has Nashville worked one-on-one with SK74, tweaking and fine-tuning his value, the club has become both a home and family to Sergei. Nashville has just begun polishing this diamond in the rough, and Sergei Kostitsyn wants to shine brighter.


Here’s a highlight video of today’s (15 May 2012) IIHF tournament games. You can see Sergei’s goal against Canada at the beginning of the video.

LadyPreds.com is not affiliated with the NHL or the Nashville Predators. Just a fan and her thoughts. All photos and/or content are either that of Lady Preds or of their respective owners. Credit is given to content not that of Lady Preds.