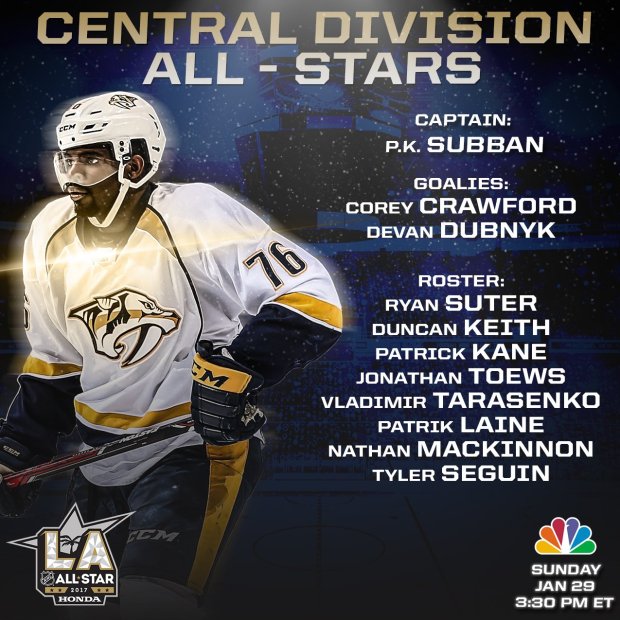 Moments ago, the NHL released the final roster of the 2017 NHL All-Star Weekend in Los Angeles January 28th-29th. Not surprisingly, Nashville has only one player on said roster: P.K. Subban, who was voted by the fans as the Central Division Captain. And, with his upper-body injury slated to be healed by the All-Star Weekend, Subban may have to relinquish his captain duties to someone else for safety’s sake.

What do you think about the roster for this year’s All-Star Weekend? Nashville isn’t the only team with one representative, but if you want to include former Preds (Ryan Suter, Devan Dubnyk, Seth Jones, and Shea Weber), then Nashville’s actually pretty well represented.

All joking aside, the big question is will Subban be healthy enough to participate? As mentioned, his 2-3 week recovery time ends at about the time of the All-Star festivities, but should not participate if it risks re-injury (thus keeping him out of the lineup even longer). Of course, that will be something the organization and Subban discuss as time gets closer. 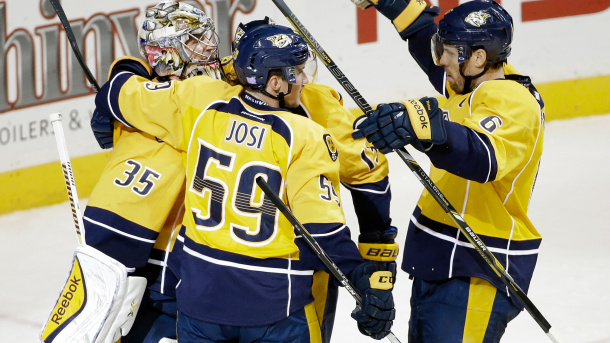 Shortly after revealing the All-Star Game jerseys, the NHL released the ASG roster. Without further ado, here you go:

I’ll be completely honest here (and so will a bunch of other bloggers): I honestly did not believe Nashville would get three players to the roster. Of course, it ended up between the three everyone thought had a chance. Shea Weber had a shoe-in, simply because he’s the captain and they want him in the ‘hardest shot’ contest, but Roman Josi and Pekka Rinne were toss-ups. Though Josi definitely deserves it, Rinne is more well known and money talks.

Over all though, I am definitely happy Shea Weber, Pekka Rinne, and Roman Josi will get to represent Nashville (in Nashville) for the 2016 NHL All-Star Game and weekend.

Here’s what others are saying about the roster choices:

Shea Weber breaks his own #Preds record with his 5th-straight All-Star appearance. No other NSH player has had more than three.

Now the real question: what skills competition will Roman Josi compete in?

Remember that some players decline invites. Fans should temper their outrage at players missing with that in mind. https://t.co/4SnH0dpJ9I

Told Jets wanted Wheeler to go, but when you look at forwards for Central, there was no room — with every team getting one rep. Tough spot.

Quote of the day from Pekka on being a goalie in the new 3-on-3 All Star format. "Probably be pissing in my pants" pic.twitter.com/uRpQWAo8G9

Okay, so I am officially excited; I am not going to lie. Nashville is well represented and that is satisfying enough. Congratulations to Weber, Rinne, and Josi!

Rookie Filip Forsberg is saying bye-bye to the kids table and is saying hello to a roster spot during the NHL All-Star Game this coming Sunday, January 25th. Here’s a snippet from the press release:

Forsberg joins defenseman Shea Weber, goaltender Pekka Rinne and the Predators coaching staff led by Head Coach Peter Laviolette in being selected to the 2015 All-Star Game, forming the largest Predators contingent ever to represent the franchise at the contest.

Forsberg replaces an injured Evgeni Malkin, who is currently suffering from a lower-body injury. It is also interesting to note that Forsberg will be the only rookie taking part in the All-Star Game and he continues to lead all rookies with 40 points in 45 games.

Are we proud? You bet we are!

By now, you already know about the trade between Nashville and Pittsburgh involving the exchange of Patric Hornqvist and Nick Spaling for Right Winger, James Neal. Has it had time to sink in yet? Nick Spaling was on the radar to take flight, but Hornqvist came as a surprise to just about everyone.

James Neal, first drafted in the second round in the 2005 Draft by the Dallas Stars, was a goal collector from the get-go. Scoring no less than 20-goals a season, in the 2011-12 season, Neal topped the charts with 40 goals — as a Preds fan, could you imagine forty goals from one player, not a multitude of several together? Since the 2011-12 season, he has lost some steam, but in Predators terms, he’s still on fire (again, no less than twenty goals since).

Though the loss of Hornqvist tears deeply at the heartstrings — the price of being a fan — now that the dust has settled from yesterday’s trade, you’ll be able to see with clearer eyes that, in order for the Predators to make the move towards the ultimate prize, sacrifices must be made. Unfortunately, Hornqvist was that sacrifice (sorry, Spals). This is a great sign from the leaders of this organization that good things are on the horizon. Moves like these are (for Nashville’s sake) what it is going to take for Nashville to get back in the playoff chase and make a legitimate run towards the Stanley Cup.

Here’s an exchange between the media, James Neal and Evgeni Malkin:

That was a good little .gif set to find, right? Neal wants t he puck. He wants to shoot. For a defensive team like Nashville, this is the exact exchange we want to hear from former teammates. Shooting leads to goals. Goals leads to winning. Winning leads to playoffs. Playoffs lead to Cup. Sounds like a no-brainer, right?

Hornqvist has been a really good player for the Preds. But having said that, James Neal is an upgrade. No matter how you slice it 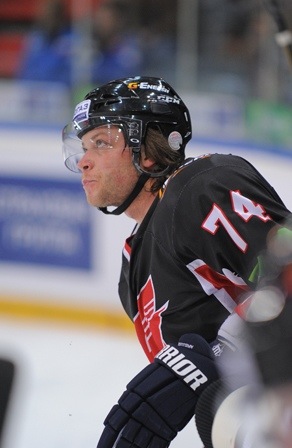 Welp, the results are in for who will be in the starting lineup in the KHL All-Star Game and it looks like Sergei Kostitsyn has made the cut.

Sergei Kostitsyn is just one of three forwards starting for Team East, paired alongside Evgeni Malkin of Metallurg and Evgeny Kuznetsov of Traktor. Defense on Team East includes Ilya Nikulin of AK Bars and Sergei Gonchar of Metallurg MG. The starting goal is Michael Garnett of Traktor.

The starting line up for Team West is a bit more starstruck, with Alexander Ovechkin of Dynamo Moscow, Pavel Datsyuk of CSKA, and Ilya Kovalchuk of SKA rounding out the forwards. Zdeno Chara of Lev Praha and Alexander Ryazantsev of Severstal make up the defense of Team West, with Semyon Varlamov of Lokomotiv in goal.

One name that was not named in the lineup (who held a lead up until the end of the voting period) that is a bit surprising is Predators goalie, Pekka Rinne. However, with his recent groin injury, it explains why he did not make the starting lineup. It also brings up the speculation of if his injury is more severe than we know. Hopefully not.

The KHL All-Star Game will take place on January 13th, 2013 at the Traktor Sport Palace in Chelyabinsk, Russia. 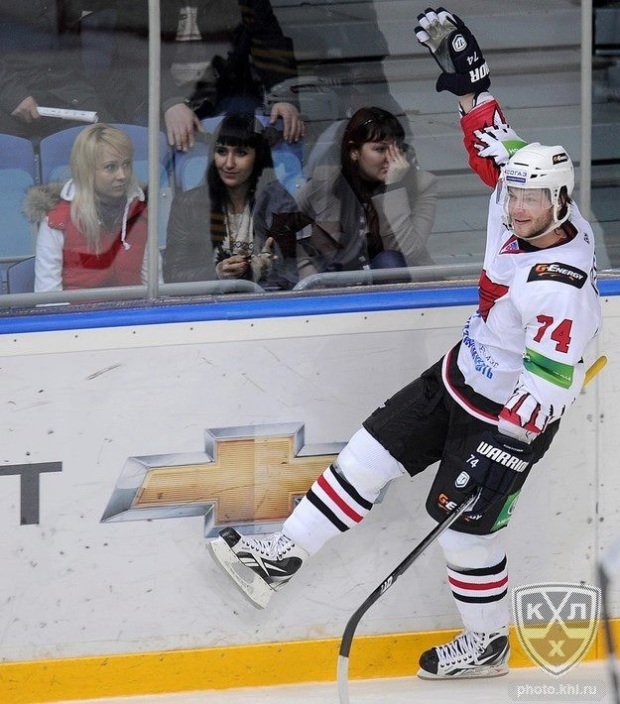 Day 88 of the NHL Lockout produced little insight on the CBA talks, but there was plenty of news on the home front for the Nashville Predators. Okay, so it was both good news and bad news…

Let’s begin with the bad news, shall we?

– Word out of Minsk, Belarus today was a bit disheartening. Though details haven’t made their way to us yet, it looks like Pekka Rinne suffered a groin injury, which has him sidelined for a while. Rinne, as you know, is currently goaltending it up for Dinamo Minsk in the KHL whilst the lockout continues to ruin the NHL as an organization. As we stated, not much more has been released, but if the lockout were to end relatively soon, it looks like Chris Mason would be taking the reins.

While you lick your wounds from that punch in the gut, we will go ahead and let you know that’s the only bad news from today. So let’s bring on the good news:

– Continuing with Pekka Rinne, although he is injured, he is still leading the goaltenders in the KHL’s ballot for their All-Star Game. Although Peks hasn’t exactly had the best luck in the KHL, he is obviously doing something right to get the fans of Dinamo Minsk to vote for him.

– Like Rinne, Sergei Kostitsyn is leading the ballots in the forward category. Yes, we said Sergei Kostitsyn. He’s been on fire since joining up with Avangard Omsk, putting up points in just about all of his games. It’s no wonder he’s been vocal about hoping the lockout continues; he’s the star he’s always wanted to be without ever leaving home (err… sort of). When you’re beating out more notable forwards such as Alexander Ovechkin, Pavel Datsyuk, and Evgeni Malkin, it’s completely understandable why you’d want to stay in the KHL.

So, although not much progress was made during today’s CBA talks (surprise, surprise), it was an eventful news day regarding the Predators. If you are interested in following the KHL All-Star standings – seeing as how our dreams are dashed – check out the site here.

Alexander Radulov wastes no time getting back into a Preds sweater.

After a rough and embarrassing loss against the Edmonton Oilers on Tuesday, the Predators took to the road once again, seeking a win in Pittsburgh against the newly-returned Sidney Crosby and the Penguins. Since Crosby’s return last Thursday, the Penguins have left a wake of destruction behind them, burying the Rangers, the Devils, and the Jets. The only team to escape unscathed was the Flyers, and even then it was an OT loss 3-2. Just looking at Pittsburgh’s past schedule (their last loss since Sunday was against Buffalo on February 19th), it is clear the Predators weren’t just going to walk in here and walk out with a win. Even with the return of Alexander Radulov, the Predators were going to have to make little to no mistakes against this Eastern Conference powerhouse in order to steal their ranking back from the Red Wings.
Here are the highlights from tonight’s game:

Last but not least, congrats to Alexander Radulov and sealing his first goal of his NHL career since leaving for the KHL four years ago. Not only that, sinking that said goal in his first game back. Similar to Andrei Kostitsyn’s first goal as a Predator during his first game (also on the road), Radulov started off on the right foot tonight.

The Predators are on their way back to Nashville tonight, taking tomorrow off and then taking on another Eastern Conference foe, the Atlanta Thrash- err, Winnipeg Jets. And, just for good measure, the puck will drop at 6PM instead of the usual 7PM start time, easing the folks on EST (what about us with Pacific time?!). Don’t forget, the Predators will be having a public practice tomorrow at 11AM at Centennial Sportsplex.