Or so we think. Although the original time frame for the new Adidas jersey reveal was sometime around 9PM, the Nashville Predators jumped the gun and released a video around 2PM. However, after making the rounds on social media, it was quickly pulled from the Predators website. Did someone accidentally hit publish instead of draft when working on it? Possibly (I’ve done it before), since it was eventually removed from the site. Seeing Nashville reveal their jerseys prompted the St. Louis Blues to release images of their new sweaters, but they, too, quickly removed the video from their site.

Whether it was an accident or not, we now know what Adidas has done to the Nashville sweaters from this point forward. And, as you can image, the reviews have been… not as positive as one would hope. For better comparisons, here is an image of the old Reebok jersey and the new Adidas brand: 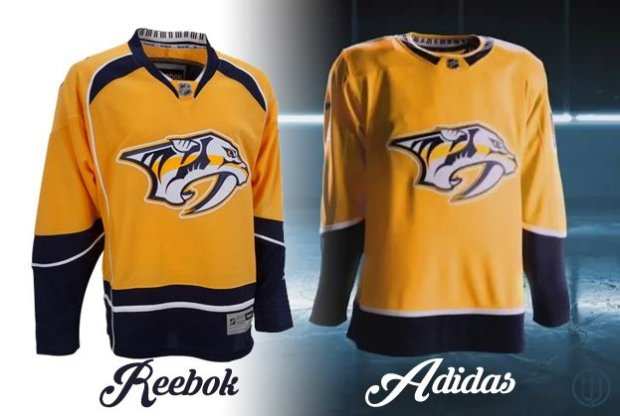 The intent, I believe, was to simplify the look, but – in my opinion – it kind of looks like a long-sleeved t-shirt that sort of wishes it was a jersey. Don’t get my wrong; I actually do not hate it. I am trying to keep an open mind as I vaguely recall being turned off by the gold jerseys when they were first revealed with the ‘BEHOLD THE GOLD’ campaign, but it eventually grew on me. I believe these new jerseys will grow, not only on me, but on the majority of you all before you even realize it. But, for now, let’s enjoy some reactions from around the Twitterverse:

Really hoping this new jersey by Adidas is like when my girlfriend is shopping and says, "it's much cuter once you actually put it on".

Looks like a practice jersey now, not a big fan. I don't hate it, but I think it's a downgrade.

Ya if this is legit and the new NSH sweaters… not a fan 👎 pic.twitter.com/uapnHRjwQq

While all of those reactions come across as negative, we did get one positive opinion:

Although sarcasm is sometimes hard to detect via Twitter, so this could be all for not. Anywho, what are your thoughts on the new Adidas jersey? It will be an interest change, but definitely not anything fans could not get used to eventually. I am interested in seeing the league’s other jerseys once they are revealed.